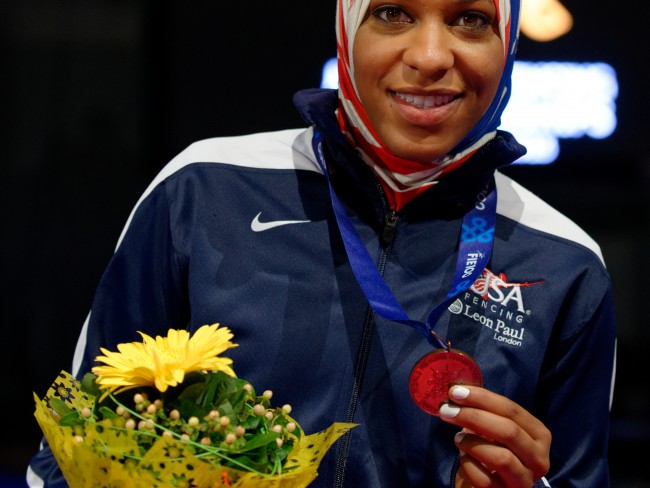 Ibtihaj Muhammad is the seventh-best fencer in the world. So, to be fair, maybe she is brave because she can just run you through with a sword if you annoy her. But someone did annoy her recently, and she handled it – well, bravely.

Ms. Muhammad was at SXSW, picking up her badge. And the volunteer told her she’d have to remove her hijab. Ms. Muhammad refused, and then she tweeted about, because she sees it as her responsibility as a Muslim and an American to speak up. Here it is in her words, “I feel like I owe it to people who look like me to speak out. When I hear someone say something like, ‘We’re going to send Muslims back to their countries,’ I say, ‘Well, I’m American. Where am I going to go?”

That’s kind of garden variety brave, though. Making a fuss on social media. So what? Here’s what: athletic sponsors don’t like controversial athletes, and making a fuss about religious fairness is just not cool. So, this, to me is the brave part. Ms. Muhammad also said this: “If a sponsor wants to walk away … they weren’t meant for me anyway.”

Those are words for life, right there. If your employer doesn’t allow bravery, maybe it’s time for a new one. We don’t all have that choice. Money allows us to eat and live under a roof and pay the doctor, and you can’t pretend that isn’t true. The seventh-best fencer in the world has some choice about her sponsors. But maybe you – the best proposal writer in your zip code, the hardest-working epidemiologist in your division, person who always knows how to make the budgets make sense – have more choice than you realize.

Today, take a moment and consider your own worth. Could you walk if you wanted? Does that give you room for a little more brave?