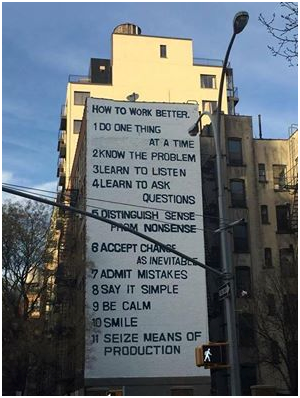 Lifehacker suggests asking for a reference letter when you leave a job. Because they think it’s 1973? No one uses reference letters anyone more. Having them won’t get you a job; it will make you look ridiculous.

Career advice that isn’t terrible: have a things not to do list

This Atlantic article on being broke in America is heartbreaking and eye-opening. We really, really do need to talk to each other about money more.

David Zetland calls for bravery in ocean protection: “The oceans are out-of-sight, out-of-mind for most people (even most Dutch), but their vastness means that small changes can have crushing impacts on humanity (through changes in biological productivity, sea level, storms, and so on). As I said at the conference, it’s time for a REVOLUTION in #oceansgovernance, not “reform.”

And, speaking of revolutions, I dearly wish this mural (ht: fp2p) was real: