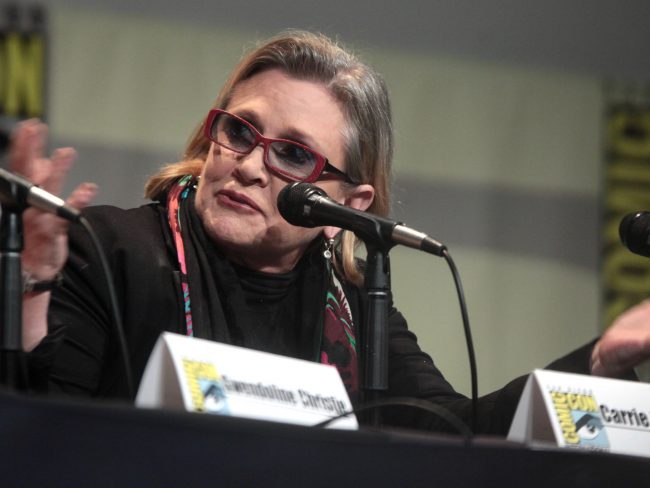 I re-watched Star Wars this weekend, and I noticed two things:

2. Carrie Fisher is the reason the movies are a classic.

Unlike the rest of the crew, that woman can ACT. Mark Hamill’s acting can best be described as very much a product of its time. And, frankly, Star Wars is not Harrison Ford’s best work. He knew these were genre films (and he didn’t know it was going to explode the way it did) and he’s clearly phoning it in at times. In return of the Jedi, you can almost see him thinking, “I was in Blade Runner! I’ve worked with Coppola! Why am I playing Han Solo for the third time”

Without Carrie Fisher, you have a big, fun science fiction trilogy. Maybe you even have the Indiana Jones trilogy. But you don’t have the cultural weight and emotional resonance of Star Wars; you have a great eight hours of entertainment.

Carrie Fisher is what makes the movie real. Her Leia is spot-on perfect, an actual, irritable human woman fighting an impossible battle. Even in the face of some awful late-70s relationship tropes. She owns it and she sells it to us so utterly that we accept the whole story. Our disbelief is not just suspended; it’s taken from us by Fisher’s Leia.

The wholly believable character of Leia makes the entire trilogy feel gritty and plausible and emotionally authentic. To use some irritating management-speak, Carrie Fisher is the different between good and great.

How can I be Carrie Fisher? What project am I part of that I can make great instead of good? Or slightly better, at least?

Photo from Gage Skidmore, cropped by me