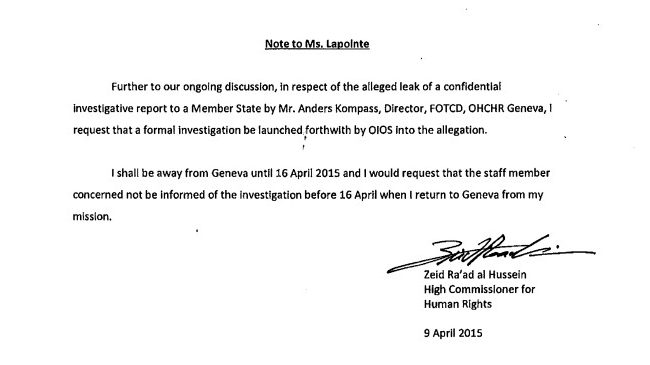 Anders Kompass ended a thirty-year career with the UN because he saw children being abused and would not let it stand. Kompass was a senior UN official – field operations director at the Office of the United Nations High Commissioner for Human Rights. He received a confidential report of sexual abuse by French peacekeeping troops in South Sudan. Children as young as eight years old were being forced into sex in return for food or small amounts of money. Kompass gave the report on to the correct UN authorities to investigate it. They got busy and forgot because of funding cuts. So Kompass passed the report to the French government, who launched an investigation.

In January, Kompass was exonerated. Of course. But he’s done with the UN system. Anders Kompass has now resigned from the UN in disgust. IRIN news had the exclusive. He told them:

“The complete impunity for those who have been found to have, in various degrees, abused their authority, together with the unwillingness of the hierarchy to express any regrets for the way they acted towards me sadly confirms that lack of accountability is entrenched in the United Nations. This makes it impossible for me to continue working there.”

You can find the primary sources on all this at the Code Blue website. They have a cache of internal UN documents posted.

Anders Kompass was enmeshed in the kind of bureaucracy that can bury your moral compass in sheer red tape. The UN is all about process. The unspoken promise is that following the right process will bring good results. Maybe that’s true. But how do you know when the process isn’t right? How do you know when your process leaves you nothing but abused children left without protection? The investigation report found that even UNICEF (I wish I could put that in all caps for emphasis, maybe I’ll just repeat it instead UNICEF UNICEF UNICEF bloody hell UNICEF) didn’t properly protect the children involved.

But, Anders Kompass knew. He wasn’t too deep in the red tape to know when it was time to burn the bridges, screw the process, and protect children. He may have been a well-paid senior bureaucrat, but he also knew what to do when faced with an injustice he could stop.

Let’s all be that bureaucrat.